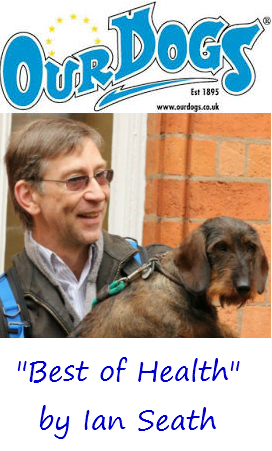 This month, I am grateful to Lesley Bloomfield, joint BHC for English Springer Spaniels, for sending me a summary of the proceedings of the 2016 Breed Health Coordinators’ Symposium. This is an annual event and is an opportunity for BHCs to meet and discuss current hot topics.

Lesley’s overall summary is as follows: “The general atmosphere was relaxed, friendly and women outnumbered men by some degree! You could get a sense that many more BHCs were feeling somewhat more motivated, generally better informed and in some aspects gaining more support from within their breeds than was recognisable in attendees at past Symposiums. Many seemed much more clued up about data collection – or wishing to be – although it appeared that some weren’t all that confident exactly how to go about it and what to do with the data they might capture.

It is clear that the KC Breed Health Team are keen to do a good job; they are mostly young and enthusiastic. Engagement with the BHCs would seem to be more of a priority than in the past and communication was much improved. They are more aware of those ‘breeds’ with either, more ‘health and welfare’ challenges, and/or those where ‘politics’ of the Breed Clubs are not always helpful to assisting in the progress and establishment for collecting evidence-based material.”

The Agenda provided attendees with a varying degree of information and the presentations, in particular, were interesting, well delivered and overall, provided food for thought.

The day kicked off with (the star of the show) Dan O’Neill who talked about Unweaving the Rainbow of Canine Health. The basic message was Base your belief on the truth of the evidence and Dan reviewed some of the amazing work being done through the VetCompass project. He answered 5 frequently asked questions from the analysis of data from 2.7 million dogs attending nearly 500 UK veterinary practices:

Next up was Brenda Bonnet (CEO IPFD) with: UK Breed Clubs and the International Partnership for Dogs (IPFD): Participating in global efforts for health, wellbeing and welfare.

A lively, amusing and engaging Speaker who, like Dan, is an Epidemiologist who shares the enthusiasm and has an appetite for the collection and analysis of ‘evidence based material’. She also emphasises the importance of ‘engagement with all stakeholders’, ‘education of both the general public and the clinical community’ plus the desirable requirement of ‘teamwork’. She stressed the importance of “changing people’s behaviours” rather than simply only focusing on dog health. It was down to the ‘decision leaders’ in the canine world to bring about actions, she said.

She envisages the part that IPFD/DogWellNet will work as follows: Sourcing resources to share, being proactive rather than reactive and generating an environment where all stakeholders can work together.

She invited BHCs to join the IPFD site DogWellNet.com and submit/share health input where they had some, or use the resource to share/utiliise the data that has already been collected.

IPFD will be holding a Seminar/Workshop in Paris in April 2017 to which all stakeholders (including BHCs) are invited.

Cathryn Mellersh provided an update on the Give a Dog a Genome project which now has 75 breeds participating. She gave a basic lesson in genetics and explained the process and purpose behind GDG in clear (for the most part) layman’s terms. This was well received and helped to answer any questions/queries delegates might have had in regard to where the project was going. There has since been an update received which revealed that the most cited clinical problems breeds wished to investigate were Epilepsy and Hereditary Cataract.

Aimee Llewellyn-Zaidi gave a short presentation update on a new KC initiative; the Breed Health Co-ordinator of the Year Award. The response to date had initially been a trickle but was increasing on a daily basis. The deadline for submissions was October 1st 2016. The top 5 will be chosen by a panel of esteemed professionals, with a vote opened to the public on those 5 selected. The winner will be chosen from that vote.

This is to be a ‘living document’ and to develop over time. The long-term intention is to gather, amalgamate and feed in the data provided by the BHCs with the Breed Health Improvement and Conservation Plans which were launched in September 2016.  Hopefully, this will provide the Kennel Club with a clearer (real time) picture of breed health and help to develop prioritising strategies and resources with which to address any breed’s health and welfare needs.

The main presentations from the day can be found at: