“I’m a Breed Health Coordinator, get me out of here” – my January 2018 Best of Health article in Our Dogs 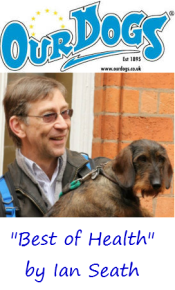 At the end of January, nominations close for the Breed Health Coordinator of the Year Award which is worth £1000 to the winner. This year, the award is part of the International Canine Health Awards which are sponsored by Shirley and Vernon Hill, founders of Metro Bank. According to the KC’s website, “judges will be looking for individuals from breed clubs or councils who have demonstrated a dedication to supporting health and welfare within their breed over the previous year. Some of the aspects that will be considered include the starting or coordinating of a new project or resource for the breed, such as a health website or health survey, and good communication with the Kennel Club”.
What does it take to be a Breed Health Coordinator? Depending on your perspective and (maybe) the day of the week, these folk are either the unsung heroes of breed health improvement or they are mugs with a thankless task!
A recent discussion on the BHC Facebook Group suggests that Breed Clubs were first officially written to by the KC in 1999 which is when the first BHCs took office. There were several BHCs or Breed Health Committees before that, just not officially recognised by the KC. One of the BHCs recalled it wasn’t until around 2008/2009 (after PDE) that the KC asked for just one official BHC to represent each breed.
It became obvious that Breed Clubs not only had to work together, but they also had to at least acknowledge health!
Toolkits and resources

Over the past few years, the KC has published a number of toolkits to support the work of BHCs. These cover topics as broad-ranging as how to develop a Breed Health Strategy, to more specific advice on designing Health Surveys and setting up websites. And, of course, there is the annual BHC Symposium which I have written about several times.
Nevertheless, it must be incredibly daunting to be appointed as a new BHC and, apparently, have the weight of expectation of your whole breed on your shoulders. This must be particularly true for BHCs in any of the Brachycephalic breeds which are certainly under the spotlight at the moment. BHCs for any of the Breed Watch Category 3 breeds (formerly “high profile breeds”) are similarly under closer scrutiny than other breeds. Thankfully, there are some very experienced BHCs among the Brachycephalic community and many readers will have seen or heard Vicky Collins-Nattrass (Bulldogs) or Penny Rankine-Parsons (French Bulldogs) on national TV and radio. These folk get plenty of support from the KC’s Health Team and the Communications/Press Team.
So, what is it that we expect a newly appointed BHC to know and do? The role is described in a Job Description and that’s OK as far as it goes. But, if you’ve been thrown in at the deep end, sometimes it’s hard to know where to start. Having had conversations with plenty of BHCs over the years, I think there are a few “basics” that I’d expect a newly appointed BHC to be considering.
Data at your fingertips

It’s highly likely that every BHC will be very knowledgeable about their breed. Specifically, they need to have at their fingertips some essential data.
What are the trends in registration data over the past 3-5 years for their breed? This tells you something about supply and demand and provides useful context for any health improvement actions.
The KC has run 2 major health surveys; in 2004 and 2014. Even in numerically small breeds, or breeds where the responses to these surveys might have been rather low, the data will provide useful evidence of health issues (if any exist). For breeds with good response rates, there will also be useful mortality data. It is essential to know how long a breed can be expected to live and the typical causes of death. Many of these surveys show few surprises, with common causes of death being simply age-related.
Building on the data available from the KC, some breeds will also have done their own surveys and there might be evidence of emerging conditions of concern. In the absence of data, a new BHC is going to have to put plans in place to move from “no data” or “anecdotal data” to something more robust. That’s when the Health Surveys Toolkit and support from the KC’s Health Team kick in.
There’s another great source of information that BHCs can tap into and that’s the research work being done in the UK and around the world. Dr Zoe Belshaw spoke at last year’s BHC Symposium about how to search for published research and how to assess the quality and usefulness of those papers. BHCs soon identify subject matter experts to whom they can refer for scientific and veterinary advice. In some cases, they might need to commission new research in their breed; others may just need help to understand the implications of the available published research.
Experience to draw on

One of the features of some of the more proactive breeds is the development of Health Schemes. Typically, based on Gold, Silver and Bronze levels these schemes enable BHCs to collect data on their breed on a routine basis. They provide a continuous opportunity to publicise what breeders and owners are achieving with the health and welfare of their dogs. Clearly, it’s not an insignificant exercise to set up and run a new Health Scheme but, again, there is lots of experience in the BHC community to learn from. Perhaps the biggest challenge for a BHC taking on a Health Scheme is how to recruit participants and to keep this going year after year.
With the current development of the KC’s Breed Health and Conservation Plans, there is a proven way for BHCs to develop a good understanding of their breed’s priorities and to structure their plans for improvement. The document itself might be a rather complex document for the ordinary breeder or owner to read, so there’s an important role for BHCs to translate it into bite-sized chunks and to present it in engaging ways. The use of infographics is just one way in which BHCs can do this.
In 1624, John Donne said “No man is an island” and, while he certainly wasn’t thinking about BHCs, for many breeds these key people aren’t working alone. They often have health committee colleagues and a broader resource network to turn to. We also have a BHC Facebook Group which is a great source of advice and support, and last year, the BHC Mentoring Scheme was launched.
So, for those BHCs who are feeling under pressure and thinking “I’m a BHC, get me out of here”, I’d encourage you not to worry about trying to change the world, but to think about the long game and take inspiration from what we’ve all managed to achieve over the past 2 decades.
[For the avoidance of doubt, I’m not a Breed Health Coordinator, but I am a member of the Dachshund Breed Council’s Health Committee]
.
.
.
.
.
.
.
.
.