Health-tested does not mean “healthy”: my “Best of Health” article for March 2020 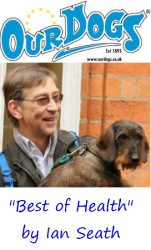 I’ve been involved in several conversations over recent months about where we should focus our efforts if we want to improve the “health of dogs”. In my breed, Dachshunds, we often focus on back disease (IVDD) as the most significant health issue facing the breed. The evidence suggests the breed is 10-12 times more likely to suffer IVDD than dogs in general. Our breed health surveys also tend to support the widely quoted figure of 25% of Dachshunds being likely to suffer an IVDD incident at some point in its life. However, that means, on average, 75% of the breed won’t have IVDD and in some of the Dachshund varieties, the risk of IVDD is lower still.

There are, no doubt, similar situations in other breeds; for example, heart disease in Cavaliers, cancer in Bernese Mountain Dogs and BOAS in brachycephalic breeds. In some cases, screening programmes exist which breeders can use to reduce the risk of breeding puppies that will be affected by a particular condition.

Screening programmes typically make use of 2 types of test; phenotype tests and DNA tests. Of the former, Hip, Elbow, Heart, Hearing and Eye tests are well-known and (mostly) well-established ways for breeders to test their stock. The Kennel Club’s recent paper Effectiveness of Canine Hip Dysplasia and Elbow Dysplasia Improvement Programs in Six UK Pedigree Breeds demonstrated good participation in Hip Scoring and a reduction in the prevalence and severity of Hip Dysplasia. In contrast, the Respiratory Function Grading Scheme for Bulldogs, French Bulldogs and Pugs is relatively new but offers a useful way to reduce the chances of breeding puppies affected by BOAS.

When it comes to DNA tests, most breeders are now familiar with what the genotype results of Clear, Carrier and Affected mean and can use these to avoid producing affected puppies. For example, breeders of Mini Wire Dachshunds have used the Lafora Disease DNA test to reduce the number of at-risk litters containing affected puppies from 55% to 2% since 2012.

More and more DNA tests are becoming available, so it will be increasingly challenging for breeders to decide which ones to use. This is particularly true where the test may not have been rigorously validated to demonstrate its link to a clinical condition. The issue of test validation was one of the emerging concerns from the 4th International Dog Health Workshop, held last year in Windsor. The arrival of panel tests potentially adds yet more confusion to the debate about healthy dogs. Just because a dog can be screened for 150 known genetic mutations and found to be Clear of all of them, doesn’t mean it is “the world’s healthiest dog”. Many of those mutations may be completely irrelevant to your breed in terms of clinical illness.

When we consider both phenotype and genotype tests, we are really looking at diseases, not health. It can, therefore, be potentially misleading to puppy buyers to hear a breeder describing their dogs as “health-tested”. At best, we can say we have screened our dogs for particular, known, conditions to reduce the risk of our puppies developing that condition. We can’t say anything about the risks of them developing other health conditions for which no test is currently available. In the case of phenotype tests, the risk of a dog developing a problem often has an environmental and lifestyle component.

An owner’s view of health

According to the PDSA, vets estimate that around half the dogs in the UK are overweight or obese. A study published in 2018 found 65% of dogs were overweight and 9% were obese. The knock-on effects of dogs being overweight include a reduced quality of life as well as increased risk of diabetes, heart disease, and arthritis.

Given this evidence about “health”, there’s a good case for investing time and resources into helping people to be better dog owners. In 2015 we carried out a Lifestyle Survey of Dachshunds with the specific aim of identifying any factors that might be associated with the risks of IVDD. This built on a 2013 study done by the Royal Veterinary College that found obesity was one of the risk factors for IVDD. We found, unsurprisingly, that dogs that were more active and given more exercise had a lower risk of IVDD. More surprisingly, we found that neutered dogs had an increased risk of IVDD and the younger they were neutered, the greater the risk.

It’s pretty clear that simply using disease screening programmes (“health tests”) as a means of saying we are breeding healthy dogs is too narrow a perspective. Breeders, buyers and owners need information from 5 questions to make an informed decision about how healthy their dog is likely to be:

The term “healthspan” has been used to define the length of time during which dogs (and other animals, and humans!) are generally healthy and free from chronic illness. Maybe we should be having more conversations with breeders and owners about how they can increase the healthspan of their dogs.