This is reproduced from the KC Staff Newsletter, with permission: 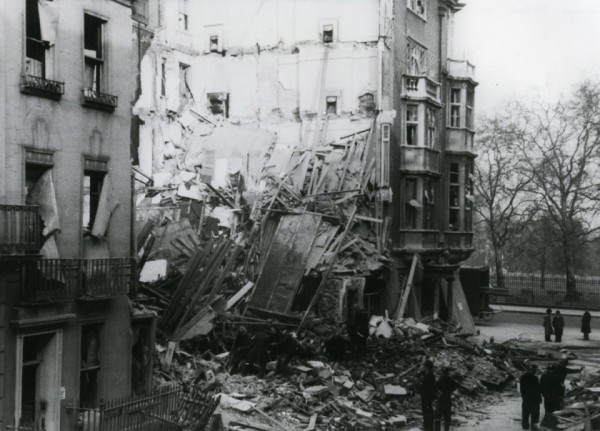 As the nation prepares for the 75th anniversary VE Day commemorations, here is a stark reminder of the reality of war.

During the Second World War, many parts of London were bombed including Mayfair. The photograph shows the destruction of 1, 2 and 3 Clarges Street on 11 May 1941, four years before the end of the war.

The destruction of parts of Clarges Street marked the final day of what the tabloid press termed at the time ‘The Blitz’.

At the time, the Kennel Club was sited at 84 Piccadilly (in the background) where remarkably it sustained only minor damage.

A most distinctive landmark on Piccadilly during this period was the Kennel Club Hound, a life-size bronze of a Foxhound known as ‘Forager’ which was located on top of the porch of the Kennel Club’s headquarters from where he gazed across Piccadilly and into Green Park.

On the day of the bombing of Mayfair, Kennel Club officials were amazed when they arrived at the scene to find Forager standing triumphantly, if a little charred, in his usual vantage point. He now graces the foyer of the current Kennel Club building at 10 Clarges Street, looking as good as new.

In the ’50s, the Kennel Club actually bought the bomb-damaged area in the photograph for the site of its new headquarters, but it’s rather sobering to reflect that this piece of good fortune for the governing body came as a result of the thoroughly rotten luck which rained down upon the previous owners one day in Mayfair during the war.